Jake and I thought we had entered heaven. Sunny, sparkling, glamorous, Kimberley. We attended this 3 day festival 7 times between 2005 (the purple year) and 2011, (the blue year) until Ben began running the Give festivals, in another venue.  Kimberley was great for kids. Many of the people who had been partying since the early 90s, now had children. There were so many activities and play areas and lots of willing people to entertain them. Here, Lindi Lu who became a good friend, entertains them. There was also a swimming pool and a river to splash about in. 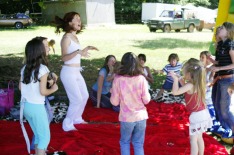 Jake and I loved wandering about, enjoying different live music in various corners of this wonderful house and huge garden. We squeezed in a massage in Poonie’s healing area, while others sipped champagne in hot tubs. Pic of tents and shrineswith bonfire. We headed back to our campervan to get ready for the evening; a bonanza of more acts,  light shows, and a huge bonfire which people gathered around. 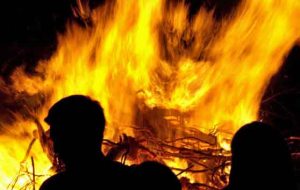 Then to our amazement there was a fantastic fireworks display that illuminated the sky. 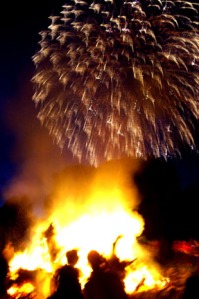 As if this wasn’t thrilling enough then the real excitement started. The cellars of the main house were opened.

And we were lured into magical arena of decadence and opulence. There were many luxurious chill out areas where people could sit and chat. Music beckoned from a labyrinth of further cellars where DJs served up their beats including our good friends from Golden Delicious, Chloe, Julie and Sephie.  More enticing beats beckoned from above ground, in other sumptuously decorated areas in large tents and in the Tractor Shed. Our minds were already blown but now we were being transported to a different galaxy.

Here the wondrous Ben did what he loved doing best- whipping out fabulous tunes.

This man is my hero- unassuming, kind and dedicated to giving people a brilliant time. Jake and I were baby boomers. We hadn’t been part of the music scene of the 90s and later, but loved being introduced to the sheer energy of it as it reverberated throughout the cellars and grounds of this amazing place. We were enslaved by the mesmerising beats and danced happily and deliriously until dawn. For a couple of OAPs we were having fun with a capital F. 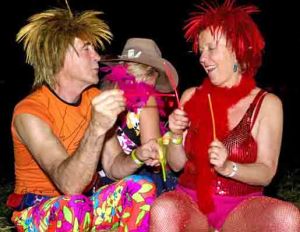 I have been having a blast writing this blog- to look at all the photos (taken by the great Greg Holloway) and just remembering how fabulous it all was.