A short while after our fabulous Golden Delicious party in 2005 (Blog 1), our friends invited my husband Jake and me, to Kimberley, a three day festival in the depth of the Norfolk countryside. As I had spent most of my adult life as a busy teacher, psychotherapist, Enlightenment Master, business woman, wife and mother, I had missed out on going to many parties.

This festival was hyped up to be the best private party in the world. And exclusive.  Famous people frequented it, enjoying the anonymity.  In the early nineties, a group of Londoners had teamed up with a group of aristos, whose parents owned a big pile in the depth of the country.

Together they started to throw these spectacular ‘Kimberley’ festival parties every summer. Two of the Londoners were the gorgeous Poonie whom we had met at the Golden Delicious party (described in my 1st blog) and her brother Ben. Ben, an actor had found what he really loved to do- organizing sumptuous parties where people could come together for three days, let their hair down and live in love. Everyone was encouraged to bring something to give to others.  There was a large healing area which Poonie managed, where party goers were treated to a variety of treatments including massages, Tibetan sound healing, reflexology and other healing practices. In the beautiful grounds dripping with strawberries, was a extravagant light garden which looked amazing at night.  Photo Greg Holloway. 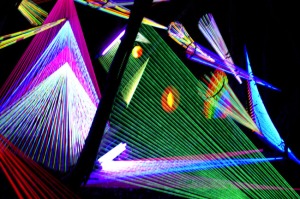 The party started with a gathering in the main tent where Allegra Taylor, Ben and Poonie’s mother, led an opening ceremony which included a meditation and orientation towards loving acceptance of oneself and each other.  To us seasoned meditators this was wonderful- like a merging between hedonist and spiritual worlds.  We were then asked to hug a stranger. This opening ritual served as an invitation to plunge into a few days of revelry.  Afterwards we were treated to a saucy and electrifying cabaret. On the Saturday afternoon, we danced on the sunny grass to fabulous bands. 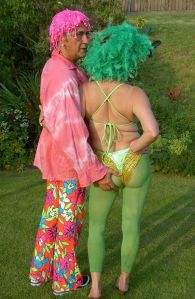 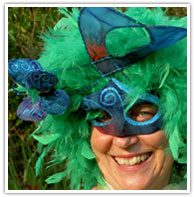 Some young people gave us herbal highs. Their friendliness, the hot sun and the brilliant beat was bliss; manna dew to my aging bones. There was so much sparkly love. I felt that in my late fifties, I was sampling some of the rave scene we had missed. Jake and I had a ball and especially loved being seen as the golden oldies who were crazy about each other. All partygoers gathered on the huge lawn in front of the stately home to have our photos taken.  Every year there was a different colour theme. Then we were treated to a  thrilling  air show where 4 old-fashioned planes looped, hung in mid-air, and charged at each other, from great distances.Two of the planes curved a big  love heart in the air coming dangerously close as they completed the bottom crossover.

It was at that point I decided I must meet one of these pilots. A bloke who could do all that, must be really hot. Testosterone at its best. Daring, competent, decisive, gorgeous. This venture would lead to an exciting pastime in my 60s, in addition to creating party costumes -flirting! Over the next few years, a new flirtatious me emerged, and spread her wings. Kimberley was a great place to learn this fabulous art.  After a disastrous beginning and much self deprecation, such as ‘I’m far too old’, ‘I am a postmenopausal frump?’ ‘A grandmother just about to draw a pension’ –  I became a flamboyant flirt. Poonie was my great role model. She was a shining example of a happily married woman who could flirt outrageously, but stay within the confines of a monogamous relationship. That was what I was setting out to do and succeeded. Read all about it in my forthcoming book ‘Sexy at 70, A Spiritual Quest’ (I believe it is profoundly spiritual to really accept whoever one is).